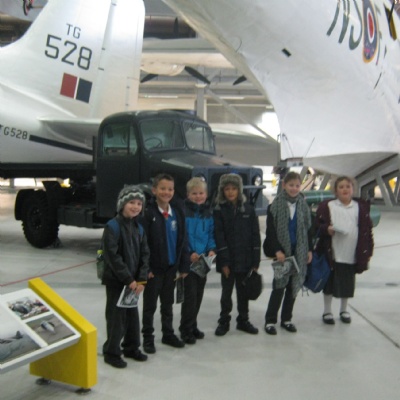 There was a lot of planes there and one was called DH9.It was for using bombs in world war one. The other plane that was really cool was called the Sunderland (Flying boat). It was a plane that could go in the water and in the air. We went in the Concorde which is a plane that you could go in, it was really tight. We had our two minute silence at the 11th hour the 11th month and the 11th day. We went in a different hanger where there was an Anderson shelter and there was a video about some things in the world war. After lunch we went to a different hanger again it had a lot of tanks in. Also there was a trench with a man in it and one bit was a fake man who looked really freaky. We went on this sort of boat that went up and down it felt weird. We saw a nurse helping a man who got shot. One tank was like an Elephant because it had the eyes and trunk but actually it was where you shot. Then we went back to school it was a really fun day.
Thank you to the teachers
Marcus